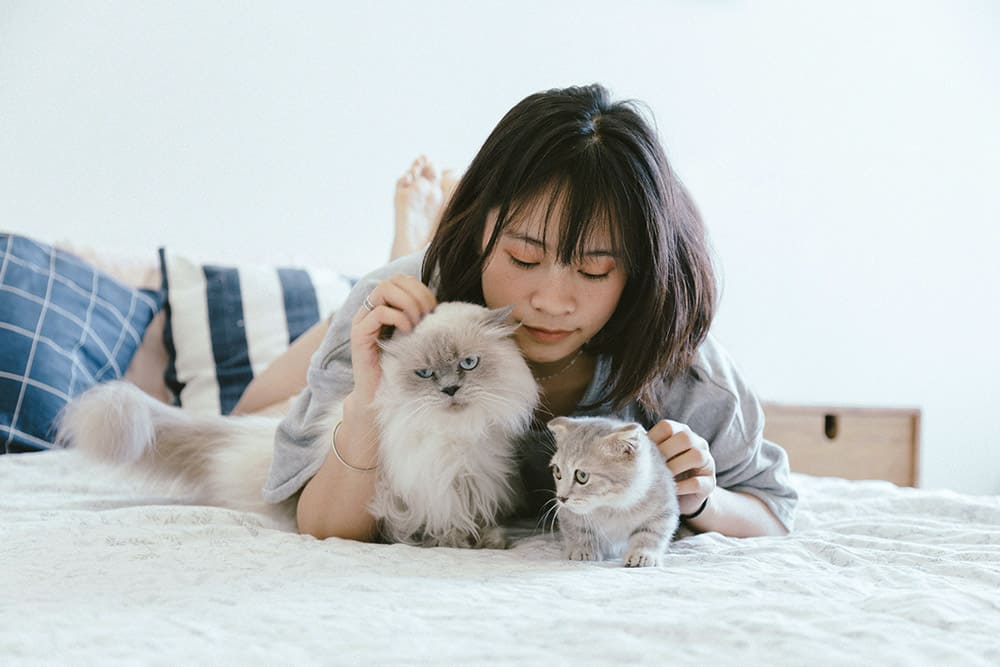 Cats and humans, why cats are attracted to you

Home » Useful Guides » Cats and humans, why cats are attracted to you

Cats and humans have a relationship that spans more than 10,000 years.

When a cat rubs against a human’s legs, it shows affection for the human being. It means they feel safe around you. But why are cats attracted to humans?

Why do cats cuddle up at night with their owners? The answer lies in a fundamental quirk in the cat’s brain.

A study shows that when a cat meets its owner, it reacts the same way as when it meets another cat. It rubs against its leg, drools, and even purrs. This reaction is down to “arousal transfer,” where social bonding between two animals is transferred from one to another. In the case of a cat, this is mostly done with its owner but could also be with another cat or even a human friend.

In ancient Egypt, people worshiped cats as religious deities linked to their society’s health and well-being. People who were suffering turned to these cat temples to pray to the cat god to heal them. In modern-day society, it is rare for people to worship them as gods. However, they still hold a high position of prestige and importance in society. Cats are seen as friendly creatures, which will make a great addition to the family home.

What does it mean when cats are attracted to you?

Cats are affectionate by nature, and often this is seen as a sign that they are attracted to you. They will be quick to purr when they see their owner after a long day at work or rub against your legs as you walk past them towards the cat food cupboard. But why do cats care about us?

As stated before, cats like to be around us because they feel safe and secure in our presence. If you were to pick up your cat or make physical contact with them, this would show them that you are not a threat and will actually stand by them if the danger does suddenly strike. This is why your cat feels comfortable cuddling with you on the sofa and why it will rub against you to show its affection.

What can I do to make cats attracted to me?

As we all know, cats are very intelligent creatures with vast memories. They learn that we will bring them food and comfort when they need it most, which is why they like us so much. If you want to encourage cats to like you, then try the following:

Why do cats pick a favorite person?

Cats are intelligent creatures that have excellent memories. This is why they quickly remember the person that brought them their favorite food or helped them when they were in trouble. They also bond strongly with gentle people and take care not to invade their personal space.

Some theorize that stray cats know that humans represent a shelter from the dangers of the road, food from the trash cans, and warmth from heated dwellings. These feral felines may be checking you out to see if you can offer some of these things, or they might think you’re a new cat in need of companionship. They might even be waiting for you to drop your guard so they can attack you for trespassing in their territory.

Why are cats drawn to certain humans?

It seems that some cats may pick their favorite person, as opposed to people picking their favorite pet. It is impossible to know why the cat has picked the person as its favorite. However, many theories surround the issue.

One theory suggests that cats remember who brought them food or helped them when in trouble and associate those human beings with safety.

A second theory says that they might also be drawn to a person they find gentle and not invading of their personal space.

Cats can become territorial animals over time, which is another possible reason for only liking interaction from certain people – perhaps you’re trespassing on someone else’s territory! Remember not to invade a cat’s personal space if you want them to like you.

Stray cats are often drawn to people who feed them or show that they care. They also form bonds with people who do not scare them by being too quick in reaching for them and will wait for these people to bond with them instead of wandering off.

How can you tell if a cat has imprinted on you?

Cat owners often notice that a particular cat will show a personal preference for them. If you believe that a specific cat has imprinted on you, then here are some clues to look out for:

So how do you know if your cat loves you or not? The simple answer is: it’s love! How can we tell if a pet loves us and feels comfortable around us? Well, they will seek out our company, rub against our legs, and purr when we interact with them. These are all signs that a cat loves us and feels safe around us. Simply having a gentle pet will make it feel comfortable with you, but some cats may be shy or nervous about new people too.

Do cats feel love when you kiss them?

It is debatable whether or not cats feel love from being kissed by a human. However, being petted on the head is typically perceived as an act of love from your cat. This comes from the cat showing submission to you as their higher-ranking member in the home.

Many people assume that they will need to kiss a cat for it to respond favorably to them, but this is not true at all. Cats have different levels of affection and just want some attention every now and then! This feeling is typically reciprocal for most pets, with them reciprocating back with similar affections for us humans.

What do cats think when we kiss them?

Cats react differently to kisses. When stroked gently, most cats will purr and tilt their head back more often than not, initiating the gesture themselves. It’s difficult to say if they enjoy the act of kissing; after all, licking is a sign delicately used among canines too. However, it is clear that eating out of our hands or having our face close to theirs provides them with what they want—stroking and petting without teasing them away with food! The only way we’ll know how cats feel about us humans would be to ask them ourselves. We’re pretty sure their answer would be this: “You’re my everything!”

Cats are attracted to humans for many reasons: the pleasant feeling they get when stroked. This can be caused by cats associating human interaction with food or safety because it makes them feel less threatened in their environment. If your cats rub against you and purr while interacting with you, this means that they have imprinted on you as a friend!