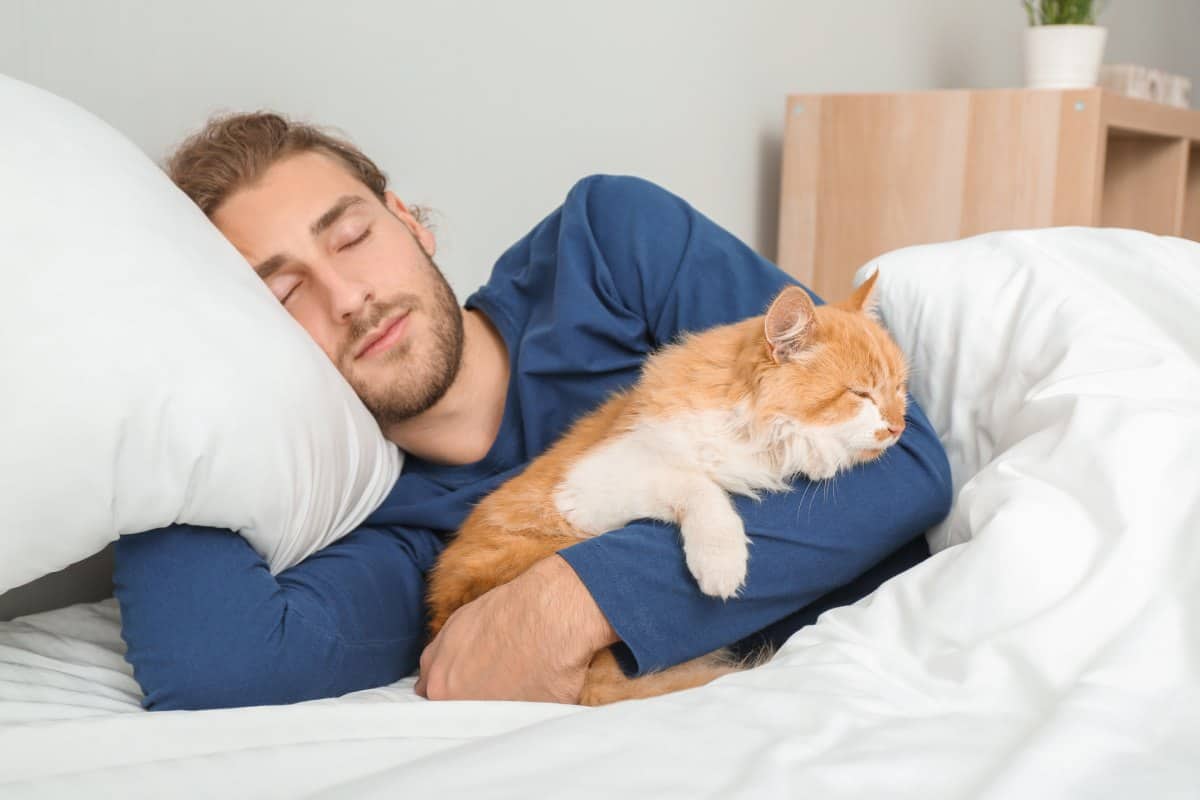 Do Cats Protect You While You Sleep?

Home » Useful Guides » Do Cats Protect You While You Sleep?

Do you ever feel like your cat is watching you while you sleep? After all, cats are known for being nocturnal animals. Is it possible that they’re actually doing their job of protecting you from potential threats while you snooze? Some experts say yes – read on to find out more!

The Role of Cats as Guardian Animals

Cats have long been associated with the role of protector. They were revered as gods and goddesses in ancient Egypt. They were considered to be able to protect people from harmful spirits in medieval Europe. Cats are still regarded as lucky charms in many parts of the world today.

There’s a reason why cats have been thought to be guardian animals throughout history. They are naturally curious creatures with a strong sense of hearing and smell. This combination allows them to be on the lookout for potential danger, even when we humans are not.

How Cats Protect Us While We Sleep

Cats usually sleep around 16 hours a day, which means they are well-rested and alert when we are asleep and vulnerable. Their sharp senses allow them to hear or smell potential danger long before we know it.

If a cat senses a threat, they usually make a loud noise to warn us. If we are still asleep, cats may physically try to wake us up by nudging us or licking our faces. In extreme cases, they may even attack the intruder!

Why Do Cats Sleep So Much?

Our fluffy friends sleep around 16 hours daily, which is twice as much as the average human. This is because they are natural predators and must be well-rested to hunt effectively.

In addition, cats have very fast metabolisms, which means that they burn through a lot of energy during the day. As a result, they need to sleep in order to restore their energy levels.

Why Do Cats Sleep on Our chests?

There are a few theories about why cats sleep on our chests. One possibility is that it’s a way for them to keep us warm. Another is that they enjoy the steady sound of our heartbeat.

Cats may also see us as their guardians and feel safer sleeping on our chests. This theory is supported by the fact that cats will often purr when they are content and feeling safe.

Do Cats Love Their Owners?

The jury is still out on whether or not cats actually experience love in the same way that we do. However, there is no doubt that they form strong bonds with their owners.

Cats show affection for us in many ways, such as purring, meowing, following us around, and sleeping on our chests. They also have a tendency to remember the kindness and will often return favors, such as when we stroke them or give them a treat.

Soul Connection Between Cats and Their Owners

Many people believe that there is a special connection between cats and their owners. This bond is often compared to a mother’s and child’s bond.

Cats are very intuitive creatures and seem to know when their owners are sad, happy, or stressed. They will often comfort their owners by purring or sleeping next to them.

Some people believe that this soul connection is due to the fact that cats have nine lives. This means that they can return and reincarnate into another cat after they die. As a result, they can form strong bonds with their owners over many lifetimes.

Do Cats Really Have Nine Lives?

The belief that cats have nine lives is a popular superstition that dates back thousands of years. There is no scientific evidence to support this claim.

However, the idea of a cat having multiple lives might explain why they are such guardian animals. After all, if they have already lived several lives, they would have a lot of experience spotting potential danger!

So, do cats protect us while we sleep? It’s certainly possible! Whether they are guarding us against potential threats or simply showing their affection, there’s no doubt that cats make wonderful bedmates.