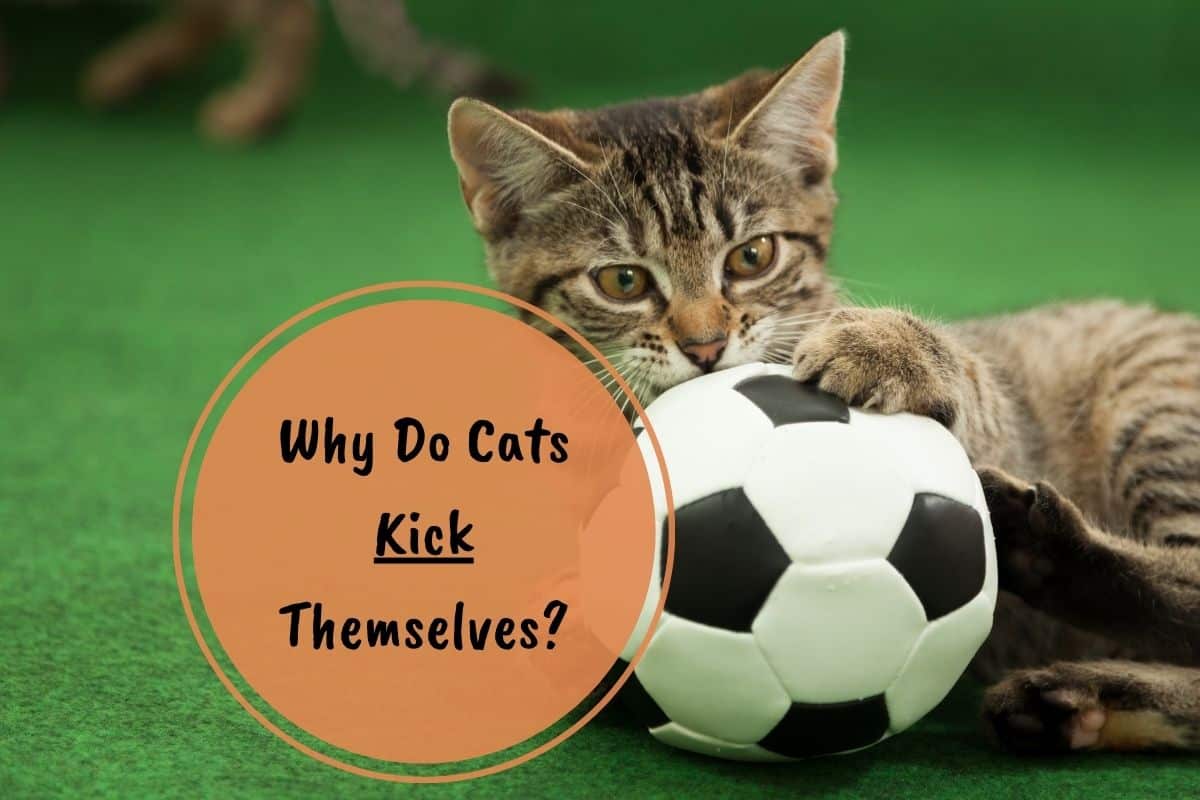 Why Do Cats Kick Themselves?

Home » Useful Guides » Why Do Cats Kick Themselves?

Everyone knows that cats are graceful, but sometimes they cannot control what their body does. For instance, you are sitting comfortably on the couch with your cat, and they start kicking itself in the face! You may get curious about why they are doing that.

Cats are funny creatures, and many things seem incoherent to humans. Here, you will get the answer to this question and learn why they kick themselves in the face and when it happens.

Why does a cat kick itself?

It can be a playtime type of kicks

When your cat plays with you, she may turn over on their back and try to grab your hand and kick the person with their paws. It happens when parent cats try to interact with their kittens and exhibit the behavior. Sometimes, it may get awkward even when your cat is coming from a nice place.

It’s in the DNA of the cat that they bring out the prey attempting to escape. If she gets carried away, her impulses will even drive her to do some intense hindleg kicks and start acting aggressively. The cat may even do some playful bunny kicks when they are playing with the animals; usually, it is fuzzy and wide.

It is not a smart idea if you are teaching your cat scratching or biting because it is not appropriate.

If your cat is going to be attacked or it is being attacked, then it will turn on its back so it can defend itself. The cat will catch her opponent with the forelimbs like in a real battle and just knock them in the bare belly. Cats are fast and do not want to compete for a long period of time and that will finish the game as soon as possible and kick the opponent to run.

For instance, sometimes the cats are just startled by their tails, and they start developing the tendency to bite it, and they start kicking themselves uncontrollably in their face until they realize there is no danger for them and it is just their tail.

One of the main reasons why cats kick themselves in the face is because of their reflexive nature. When the cat gets on their side or bends itself in a particular position, it may kick itself uncontrollably in its face.

You may have noticed that cats often bite themselves when the situation goes over their nerve signals which keeps them telling them to kick.

Is it normal for cats to kick themselves?

Yes, it is normal for cats to kick themselves in their face; that will trigger as a defense mechanism. Cats are cute and amazing; sometimes, it becomes hard for them to control their bodies. So, if your cat is kicking itself, that is normal, so you will not have to worry about anything.

Why does your cat kick itself with the back leg?

Cats usually throw their back legs to partake the play behavior such as boxing. When they fight or feel territorial, they may even behave this way when someone leaves them alone or to another person. The cat may roll onto their back when they are attacked and is currently being attacked.

Do cats attack their own feet?

Yes, cats attack their feet, which is usually because of stress. It is the main cause for their compulsive behavior which will happen when they are torn between the two competing courses.

Why do cats bite and bunny kick?

You must understand that cats engage in play-biting behavior. Biting and bunny kicking is normal behavior for kittens. This is how they will play with the littermates and also their mothers.

Most people do not even look at the depth of the situation as people usually ignore these kinds of behavior among cats. Generally, there is nothing to be worried about when your cat is kicking itself in the face because it is in its nature.

However, if you see your cat doing this thing more often and it may have lots of scratches or bruises on the face, then it is better to consult your vet first and know why your cat is getting so aggressive.