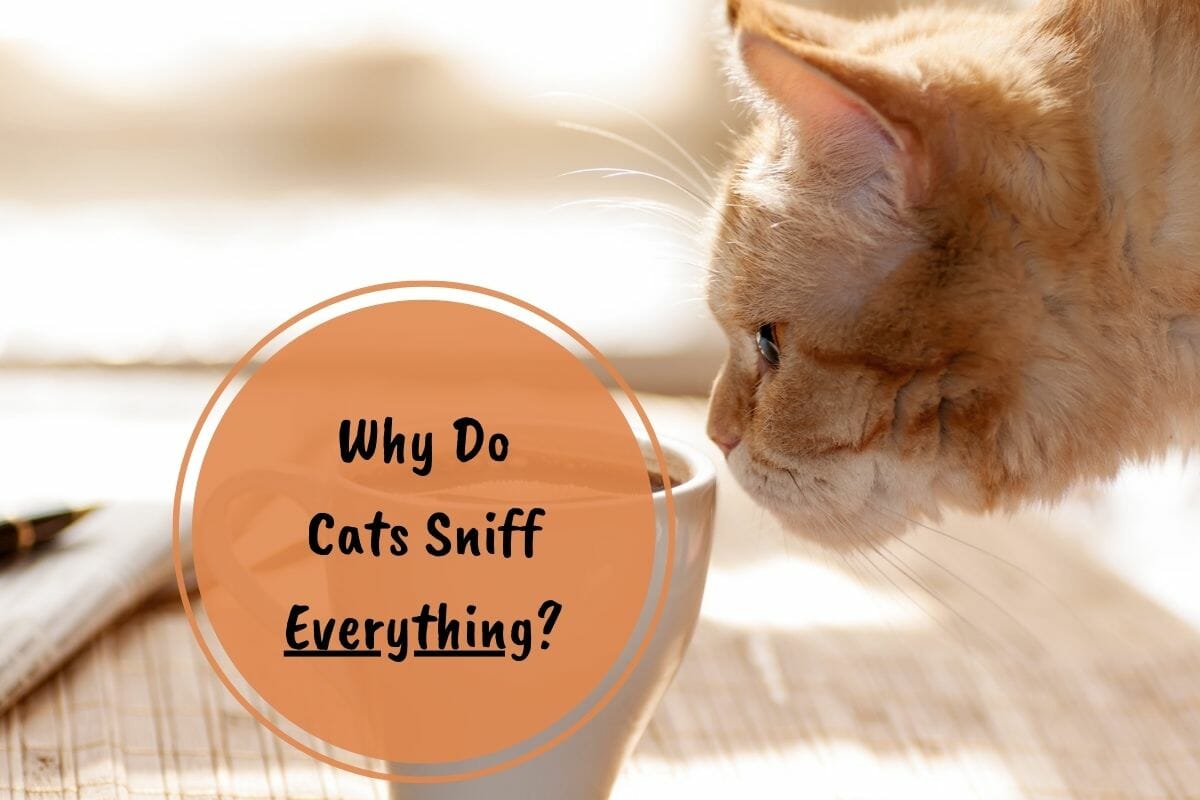 Why Do Cats Sniff Everything?

Home » Useful Guides » Why Do Cats Sniff Everything?

Generally, cats sniff everything because they identify things from their smell. It is believed that dogs rely on smell the most, but according to recent research, felines are more smell-oriented than dogs. Surprisingly, the smelling power of a cat is 14 times more sensitive than human beings.

Cats use smell for almost everything they do; they use information gathered from their nose to make decisions for everyday life. So if you find a cat sniffing everything, they are trying to gather information about their territory.

Cats explore the new environment using their nose. Sniffing everything is always them to get information about where they live, whether this food is safe, who has been there, and who their owners are. If you are a cat owner, you may have noticed that cats immediately sniffs when anything new comes to their environment.

Cat’s nose helps them in a great way while hunting prey. Cats get the smell of the small mammals and other prey around them to whom they can make their food. A quick sniff helps cats to find the exact location of their target.

Cats have the ability to detect the pheromones of other cats. If there is a potential mate in your area, you may find a cat sniffing everything to collect more information about that cat. They collect information such as

Usually, cats’ scents mark the place which they like the most. In addition, this scent gives information to other cats, like whom this territory belongs to and how many other cats are there. Before making a scent, your cat will sniff everything to decide which place is safe to mark as territory.

However, if your cat already has their territory, then they may start sniffing everything if they find any new cat in it and try to detect whether they have any threat from them or not.

How Do Cats Mark Their Scent?

You might have noticed your cat bumping its forehead, rubbing its body on your ankle, and winding its cheeks around the edges of furniture. Cats are doing nothing more than marking their scents. Cats have sebaceous glands in their body parts such as cheeks, tail, and tail base, under the chin, and paws.

There have been a few instances where cats have used their sense of smell to potentially save their human life. For example, some cats have been known to alert their owners to gas leaks or fires by smelling the hazardous substances and acting unusually.

There have also been cases where cats have been credited with detecting the early stages of diseases, such as cancer, due to their keen sense of smell. However, it’s important to note that these are rare cases, and it’s not common for cats to use their sense of smell to directly save their human life.

As we have discussed above, cats have scent glands in their toes; therefore, when cats scratch furniture, they not only leave visible marks behind but also leave their scent. Cats do such activities when they want to mark their territory and show their ownership. You will find scratching marks at every place which has high importance, such as

There is no way to prevent your cat from doing this all. However, you can try to save your cat’s claw training and new claw target so they will not scratch your expensive furniture and other things.

When a cat rubs their head and other body parts against their owner and other people, then it is called bunting. It helps the kitty to spread its signature odor on every object they rub. Furthermore, this bunting helps them to identify their family members and a safe environment with odor.

It is a positive sign if your cat rubs their forehead with your ankles because it means that they love you the most and mark you as part of their family.

Rubbing the face is a sign of deference from another kitty rubbing against its owner. However, if you find your cat bumping their head and rubbing its cheeks to your face, then it can be considered that they want to make you a friend. In addition, nose touches and hip leans are also signs of friendship.

Fascinating Facts About Your Cat’s Sense of Smell

Hey, did you know that cats have an incredible sense of smell? In fact, their smelling power is 14 times stronger than ours! Crazy, right? And you know what’s even more interesting? Cats use their sense of smell for pretty much everything they do. They use it to gather information about their environment, catch prey, identify other cats, and even mark their territory.

But here’s the real mind-blowing fact: cats have scent glands all over their body. That’s right, they have scent glands in their cheeks, tail, paws, and even under their chin. So when they rub their body against objects or scratch with their claws, they leave behind their unique scent to mark their territory.
And if you’ve ever had a cat rub their head against your ankles or wind their cheeks around your furniture, that’s called bunting. They’re giving everything a good ol’ sniff to spread their scent and mark their territory. It’s their way of saying, “this is mine, all mine!”

The next time you notice your feline friend’s olfactory senses in action, remember that they’re using their incredible sense of smell to gather information about their environment. Maybe they’re trying to tell you they love you with a good bunting session. Either way, cats rely heavily on their sense of smell to make sense of the world around them.

Why Does My Cat Sniff My Carpet?

Although there is nothing much interesting on the carpet, it may provide a lot of information to your cat. We know cats have such sensitive noses, so they can gather information like who worked out and when you walked on the carpet. In addition, they can also sniff food and spit for a long time.

Why Does My Cat Sniff Loudly?

Cats can sometimes sniff loudly to detect interesting scents using their vomeronasal organ. However, they can also sniff to express their anger and frustration. Therefore, if you find your cat sniffing, then you must treat them carefully with love.

Why Does My Cat Sniff Me?

Cats use their nose to identify their parents and owners. So, if they sniff you, it means they are checking whether you are their owner or not. You may also find cats rubbing their face and body, which means they will sniff to check the scent they have left previously.

In conclusion, cats sniff everything for a variety of reasons. Their sense of smell is incredibly strong, and they use it to gather information about their environment, catch prey, identify other cats, and mark their territory.

So next time you see your furry feline friend sniffing around, remember that they’re just using their natural instincts to navigate the world around them. And who knows, maybe they’re just trying to tell you that they love you by giving you a good ol’ bunting with their head. Regardless of the reason, it’s clear that the sense of smell plays a crucial role in a cat’s daily life.